Liverpool Legend, Jamie Carragher Reveals How Lionel Messi Slid Into His DM And Called Him ‘A Donkey’ 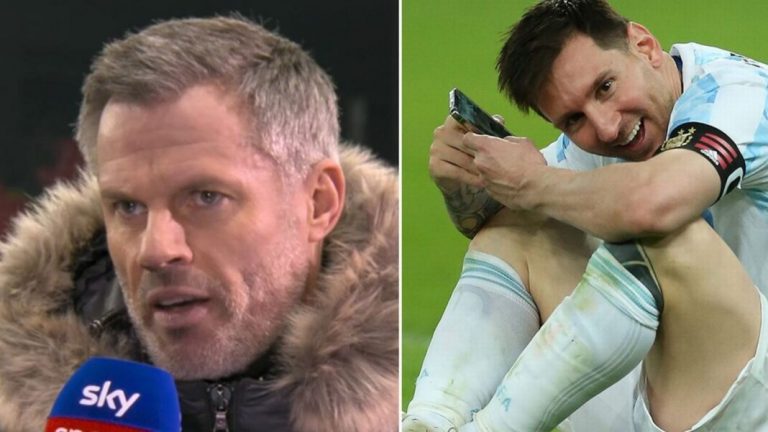 Liverpool Legend, Jamie Carragher has revealed how Lionel Messi slid into his DMs and called him a “donkey,” oyogist reports.

He and his punditry partner Gary Neville were talking about the seven-time Ballon d’Or winner ahead of Watford vs. Norwich on Friday Night Football.

Earlier in the season, the pair argued on Sky Sports’ Monday Night Football about who was the better player between him and Cristiano Ronaldo.

Messi was also mentioned again when presenter Dave Jones asked them to choose their own EA Sports FIFA Team of the Year for 2021.

Carragher in response declared: “No, no Messi [in my team]. I mean we had that debate at the start of the season, Ronaldo or Messi.“I was the Messi man, he [Neville] was Ronaldo but there’s no place in either team for them.”

“That was on Monday Night Football wasn’t it?” questioned Jones.

Carragher responded: “Yeah it was on Monday Night Football and I got a private message on Instagram.”

A shocked Jones said: “From the man himself?”

Carragher affirmed. “I will not be showing private messages but he basically called me a donkey.”

The three men burst into laughter before Jones jibed: “So he watches his football then.”

“Greatest player of all time and compared to you I was a donkey. You know, I accept that, but you’re not getting in this team.

“You haven’t played well enough, even if you did win the Copa America in the summer. It’s not enough to leave my man Mo Salah out the team.”