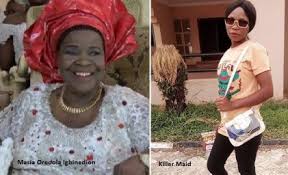 Oyogist.com has learned that the suspected killers of ex-Governor Igbinedion’s mother has been remanded in prison.

The 25-year-old suspect was remanded with her accomplices, Patience Okoro (39), Francis Taga (51), Ezekiel Danjuma (24) and Abraham Kuje, pending advice from the Director of Public Prosecution (DPP), of the State Ministry of Justice.

Earlier, the Prosecutor, CSP Peter Ngwumba, told the Court that the suspects were charged with murder, accessory to murder, negligent act, causing harm, robbery, among other offences.

He said the suspects were arrested on December 3, 10 and 13 in Benin, Edo State, Aba, in Abia State and Ikom, in Cross River State respectively.

The Prosecutor further told the Court that the prime suspect, Dominion Okoro, a cook to the deceased, on December 2, in Ugbor, GRA Benin, killed her and stole her N100,000, a golden wrist watch and necklace and absconded.

He said the suspect after committing the crime, informed her elder sister, Patience Okoro, about the crime who instructed the suspect to run away with the stolen items.

Ngwumba told the Court that the third accused person, Francis Tagaa, aided the suspect to escape by taken her to Agbor Park, Ikpoba Okha Local Government Area of the State, to enable her escape arrest after she had robbed and killed the deceased.

He said Ezekiel Danjuma and Abraham Kuje who are security guards to late Mrs. Igbinedion conspired among themselves and unlawfully commit negligence of duty to protect life and property of the deceased and permitted Dominion to escape from the gate after committing the crime.