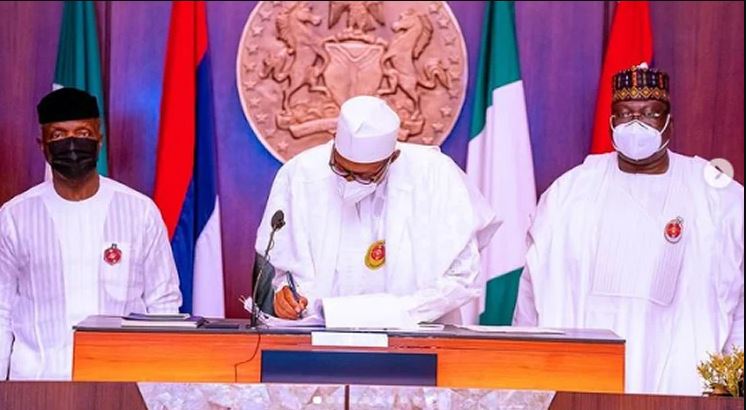 Oyogist has learned that Nigeria’s President, Muhammadu Buhari has signed the 2022 budget at the Presidential Villa in Abuja.

The President signed the documents in the presence of Ahmed Lawan, Speaker of the House of Representatives, Femi Gbajabiamila, and other members of the Federal Executive Council.

Speaking at the event, the President said the 2022 Budget, just signed into law, provides for aggregate expenditures of N17.127 trillion, an increase of N735.85 billion over the initial Executive Proposal for a total expenditure of N16.391 trillion.

The President explained that N186.53 billion of the increase however came from additional critical expenditures that he had authorised the Minister of Finance, Budget, and National Planning to forward to the National Assembly.‘

“The Minister will provide the public with the details of the budget as passed by the National Assembly, and signed into law by me,’’ he said.

“It is in this regard that I must express my reservations about many of the changes that the National Assembly has made to the 2022 Executive Budget proposal.

“Some of the worrisome changes are as follows:

‘‘Increase in projected FGN Independent Revenue by N400 billion, the justification for which is yet to be provided to the Executive:

‘‘Reduction in the provision for Sinking Fund to Retire Maturing Bonds by N22 billion without any explanation.