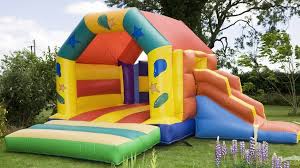 Oyogist.com has learned that Five children have died and four are being treated in hospital, with some critically injured, after a bouncy castle accident in the Australian state of Tasmania on Thursday.

In a statement, police said the nine students at Hillcrest Primary School had fallen from a height of around 10 meters (32.8 feet) after a “significant local wind event” caused the jumping castle and several inflatable “zorb” balls to lift into the air.

The incident happened at around 10 a.m. local time, Tasmanian Police said, with officers and emergency services, including two helicopters, racing to the scene within two minutes and beginning to administer first aid.

“Sadly, four children — two girls and two boys — died and another five suffered critical or serious injuries and are in hospital,” the island state’s police department said in an initial statement.

Hours later, police confirmed the death of the fifth child. They said they could not provide any updates on the condition of the four other children hospitalized.

Police said the students were in grades 5 and 6, which means they were likely between the ages of 10 and 12.