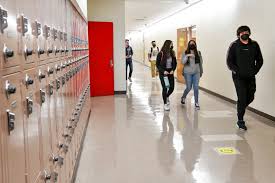 Oyogist has learned that a new Jersey Assistant teacher has been suspended for allegedly calling a Muslim student a ‘terrorist’ after he pleaded for more time on a math assignment.

The student, Mohammed Zubi, 17, of Ridgefield, New Jersey, was allegedly told ‘We don’t negotiate with terrorists’ by a math teacher at Ridgefield Memorial High School.

Following the event, the teaching assistant has since been suspended by the school authorities.

Zuby also called for a ‘public apology’ for himself and his family, as The school district said it has ‘absolutely no tolerance for any sort of discrimination against any student or staff member’.