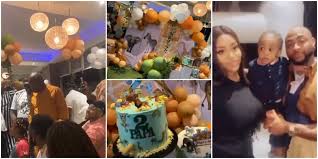 The former lovebirds came together for the first time since they parted ways to mark their son’s 2nd birthday.

On his birthday, Chioma had initially held an indoor party which had only her family and friends in attendance.

Davido however was noticeably absent at the party.

Several reactions sprung up as many thought the exes were not on speaking terms.

Shutting down the rumours, Davido threw his son an over the top bash on Saturday, and Chioma was present.

Their co-parenting skills was questioned with the cold distance they gave to each other.Many were quick at spotting Chioma’s cold expression as they posed for the gram.

While Chioma looked like one who was forced to take pictures, Davido looked unhappy.

Oyogist gathered some of the Reactions online, see below;

fer.an.mi : “Why do I feel her little dance was a shade”.I.tobiloba : “It’s so obvious she didn’t want to be there but she doesn’t have a choice”.

Favz_jamzy :“They weren’t too close to each other oo Haba”.Preciousonyemachi : “Lol _ Chioma’s face says it all ( No chemistry) But I think Davido is still in love with her deep down”.magdalin2021 : David isn’t even happy as to compare when he is at Imade birthday”.odia_ss : “BODY LANGUAGE”.roy_h.a.n : “It’s the gap between for me sha”.

Music star, Yemi Alade reveals why she has been losing friends