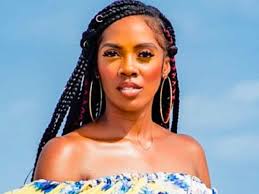 Oyogist.com has learned that Nigerian Singer, Tiwatope Savage aka Tiwa Savage has lost Major four (4) endorsement deals after her sex tape was leaked.

While the face of the man involved in it did not show, the lady in the video bears a close resemblance with Tiwa Savage.

As the video went viral, some celebrities drummed up support for the singer, as they uploaded her picture and hailed her on social media who sone criticized her over the issue.

Prior to the leaking of the sex tape, Tiwa had earlier said that someone was blackmailing her over her sex tape and revealed she wouldn’t be paying the money to the person, shortly after that her Sex tape video was leaked.

It has been reported that companies who signed Tiwa Savage on their products and goods have withdrawn their endorsement deals from the artist after her sex tape was leaked on social media.

Tiwa Savage has lost four endorsement deals from Cadbury, a beverage company, Pampers, a diaper company, Glo a network service and one other over her leaked $ex tape.