REVEALED: Dubai billionaire, Sheikh Mohammed Accused of buying a £30million estate in Windsor Park ‘to snoop on his runaway wife’ 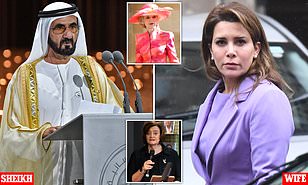 A recent court finding has revealed how a Dubai based millionaire Identified as Sheikh Mohammed , 72, ignored British laws to ‘hunt’ his runaway wife, Princess Haya who fled to London.

Not content with the spying operation, Sheikh tried to purchase a huge £30m estate next door to Haya’s Berkshire bolthole to keep even closer tabs on her and the couple’s two children, the High Court was told.

major investigations also proved that Haya feels ‘hunted and haunted’ and lives in fear of her ex-husband’s henchmen ‘snatching’ back their children Princess Jalila, 13, and Prince Zayed.