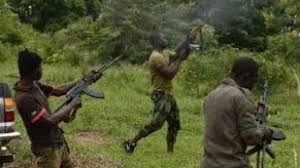 Oyogist has learned that the wife of a member of Katsina State House of Assembly, Dr Ibrahim Kurami has been kidnapped by suspected bandits.

Fmr. Lawmaker, Shehu Sani disclosed this in a tweet early hours of Sunday.

His tweet read: “While the elder brother of the Katsina state Secretary to the Government is still in the hands of bandits, the terrorists have struck again this night and kidnapped the wife of a member of State House of Assembly Dr Ibrahim Kurami.

“It’s time for the President to save Katsina state.”The worsening state of insecurity in Katsina and most parts of North has continued to cause panic in the nation.
GunmenKastina
Share
0
FacebookTwitterPinterestLinkedinRedditWhatsappTelegramViberEmail