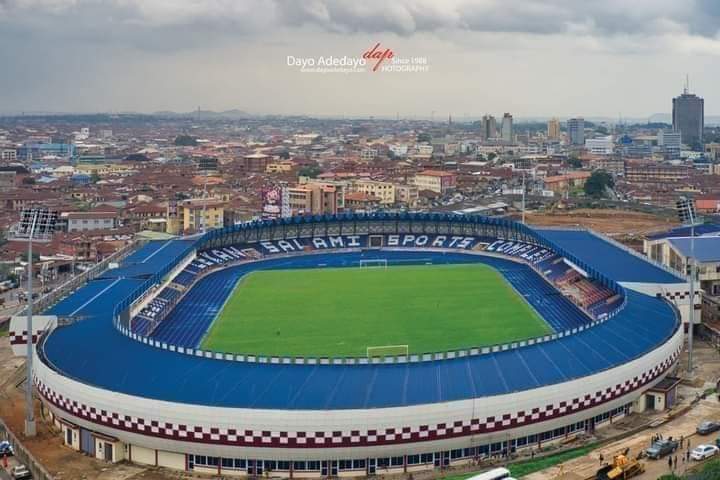 According to report reaching oyogist.com, Project Manager of Peculiar Ultimate Concerns Limited, remodeling the Lekan Salami Stadium, Engineer Femi James has denied that the drainage system was responsible for the waterlogged pitch which hindered movement of the ball during Wednesday friendly game between Shooting Stars Sports Club and visiting NK Tabor.

The Project Manager explained that the rain has been continuously falling in Ibadan for the last 12 days had weakened the ground made it unable to longer hold water.

He however promised to fix the hitches within four weeks.

Shedding light on the claims that remodeling of the Stadia cost over 5 billion naira, Mr. James explained the amount also covers the renovation of 10 other locations the firm is currently doing across the state.

“Aside the Lekan Salami Stadium, we are currently working on the Olubadan Stadium as well as some schools in Ibadan, Ogbomsho, Oyo, Iseyin, Saki and Igboora”, he said.

The Project Engineer listed other Stadia the firm has worked on in the past when asked if this project was there first assignment.

“We carried out the renovation of the Stadium in Asaba Delta before moving to Edo State where we renovated the Sam Ogbemudia Stadium which hosted the last National Sports Festival in Benin. It was after completion of the work in Benin that we commenced the Remodeling works in Oyo State” he added.

Going philosophical, the Project Manager asserted that the Wednesday incident was a blessing in disguise as it creates the necessity to test run, identify and fix the problems before the agreed time for the completion of the project expired in six months time.

“It was an opportunity for us to test-run, Nature really wanted to help us, by bringing down the rain in torrent, to allow us identify the problems and solve them. So, with our expertise and experience in this business, we know exactly what we need to do to avoid a reoccurrence” he assured.

The firm handling the remodeling of Lekan Salami stadium is into the twelfth month of the eighteen-month agreed with Oyo state government to get the job completed via the Alternative Funding arrangement.

#BBNaija; Tega breaks down in tears during diary session with Biggie

BBNaija: Angel reveals why she became friends with Queen