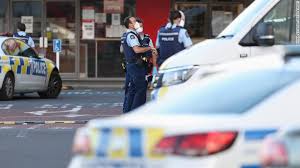 There was severe choas in a new Zealand city earlier today as a Suspected Isis supporter Reportedly stabbed at least six people in a supermarket.

The attacker was shot dead by the police, according to Prime Minister Jacinda Ardern.

The man, known to the government’s “multiple agencies”, was killed within 60 seconds after the beginning the attack, Ardern said on Friday, adding that he had been inspired by the ISIL armed group.

“It was hateful, it was wrong. It was carried out by an individual, not a faith,” Ardern said, describing the attacker as a Sri Lankan national who arrived in New Zealand in 2011. “He alone carries the responsibility for these acts.”

Three people are currently in critical condition, following the attack as the St John ambulance service arrived the scence shortly after the Incident.