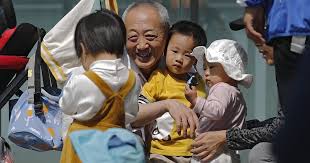 China has Unvieled plans to allow couples legally have a third child as it seeks to hold off a demographic crisis that could threaten its hopes of increased prosperity and global influence.

China’sceremonial legislature had amended the Population and Family Planning Law as part of a decades-long effort by the ruling Communist Party to govern the size of families to adhere with political directives.

The rules were eased for the first time in 2015 to allow two children as officials acknowledged the looming consequences of the plummeting birthrate.

The Communist Government expressed fear that China will grow old before it becomes wealthy.

BBNaija: “Whitemoney is my type of man”- Jackie B

“If you want a good wife, start treating her like one,” Mary Remmy Njoku offers advice to married Men