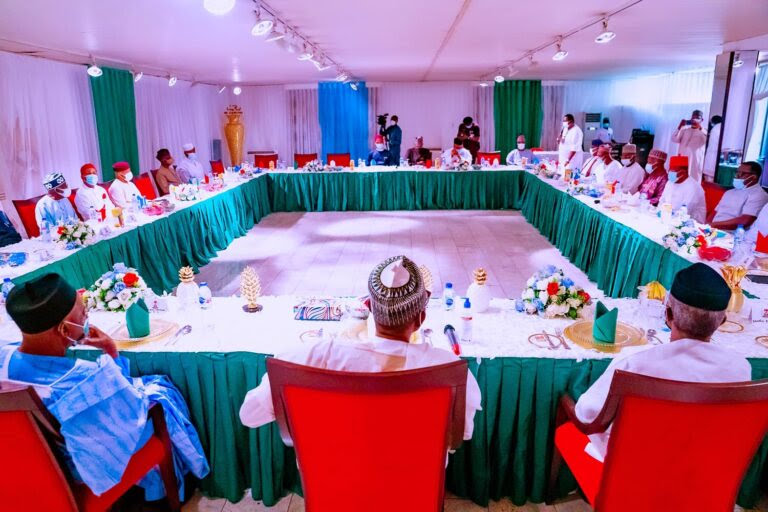 President Muhammadu Buhari on Saturday endorsed a Southern candidate to fly the banner of the All Progressives Congress (APC) in next year’s presidential election.

Buhari, who met with APC presidential aspirants at the State House, Abuja, said there was need for power to shift to the South in 2023.

His endorsement of shift of power to the South came less than an hour the Northern governors endorsed the same power shift to the South.

A source at the meeting told The Punch that Buhari did not name a consensus candidate, but asked that southern aspirants should compete at the primary.

If the APC will implement this, it means that the likes of Senate President, Ahmad Lawan; Kogi State Governor, Yahaya Bello and other northern aspirants have lost out.

On Saturday, Northern governors appealed to all northern aspirants to withdraw from the presidential race in the national interest and allow only the aspirants from the south to proceed to the primaries.

The northern governors, in a statement, said APC governors and political leaders from the northern states of Nigeria met to review the political situation and to further support party in providing progressive leadership amidst national challenges.

“During our discussions, we welcomed President Muhammadu Buhari’s invitation to governors and other stakeholders to contribute to the emergence of a strong presidential candidate for the APC.

“After careful deliberation, we wish to state our firm conviction that after eight years in office of President Muhammadu Buhari, the presidential candidate of the APC for the 2023 elections should be one of our teeming members from the southern states of Nigeria.

“It is a question of honour for the APC, an obligation that is not in anyway affected by the decisions taken by another political party. We affirm that upholding this principle is in the interest of building a stronger, more united and more progressive country,” they said.