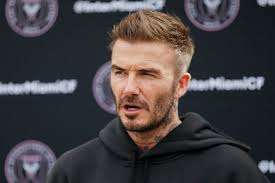 Football legend, David Beckham has shared photos of his wife alongside their children on Vogue magazine, Oyogist reports.

The football star shared these photos in a post on his official social media pages few minutes ago, as he captioned “Beautiful Family Memories’

After breaking through with ‘The Class of 92’ at Manchester United, Beckham went on to evolve into one of English football’s biggest ever stars.

Although international success eluded England’s posterboy, the 47-year-old enjoyed an illustrious, trophy-laden career and even managed to win four league titles in four different countries amongst a host of other accolades.