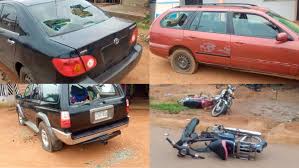 There was severe pandemonium earlier today at the venue of the People’s Democratic Party House of Representatives primaries in Obudu Local Government Area, Oyogist reports.

The primaries were held in a bid to nominate candidate to fly the party’s flag in the 2023 general elections for the Obudu/Obanliku/Bekwara federal constituency.

However, shortly after the primaries began, supporters of some of the aspirants were protesting for unknown reasons and opened fire on the policemen.

One of the policeman who was at the main entrance identified by his colleagues as Martins Mbang died on the spot while the other who was at the rear has been rushed to the hospital for treatment.