Copyright 2021 - All Right Reserved
Home Celebrities JUST IN: Prince Kpokpogri Speaks On Tonto Dikeh’s Involvement In The Demolition of His Abuja Mansion
CelebritiesEntertainment

JUST IN: Prince Kpokpogri Speaks On Tonto Dikeh’s Involvement In The Demolition of His Abuja Mansion 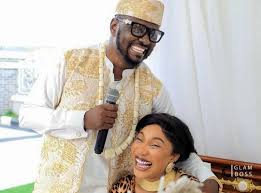 Prince Kpokpogri, the former lover of Nollywood actress Tonto Dikeh, has thrown more light on the demolition of his house in Abuja by the Federal Capital Territory Administration (FCTA), Oyogist reports.

Kpokpogri, during a live video session with controversial Journalist, Kemi Olunloyo, revealed the actress had nothing to do with his house being demolished.

The politician, in his statement, said he didn’t want to say anything about the actress as he confirmed she only used the whole thing to chase.

(VIDEO) Comedian, Mr Macaroni Expresses Joy As Angostura Gifts Him Customised Wine With his Name Inscribed On The Bottle