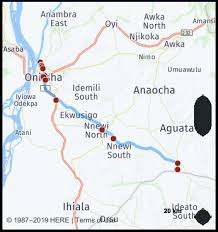 No fewer than a life Was lost on Monday shortly after unknown gunmen stormed Aguata LGA, in Anambra state, Oyogist reports.

The incident occurred around 1pm, as the gunmen launched attack on three villages in the area, including Achina, Amesi and some parts of Uga.

Our correspondent gathered that the gunmen arrived these areas in heavily armed vehicles, shooting sporodically and wrecking havoc on residents.

An unidentified woman was killed by the gunmen, a move which many described as barbaric.

Residents were urged to stay indoors for the next three days, sequel to the sit at home order earlier issued out by alleged IPOB members.