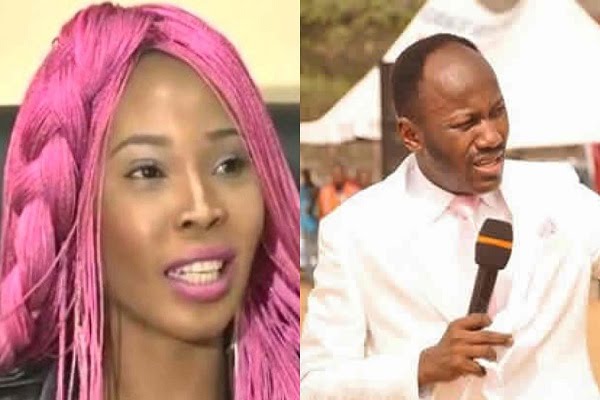 Stephanie Otobo, a Canadian based Nigerian lady who had previously accused Apostle Suleman Of Being in an Alleged sexual relationship with her has once again called out the cleric, Oyogist reports.

Otobo, in an exclusive interview with reporters described Suleman as a Small, chronic Liar:”

This comes a day after Apostle Johnson Suleman reacted to her latest threat.

Otobo had released nude pictures of their alleged intimate moments, threatening to provide videos to substantiate the claims.

However, on Tuesday morning, Suleman said the fresh allegations were orchestrated because he spoke against the prolonged ASUU strike on Sunday.

He advised the ‘perpetrators’ use other strategies to get to him.

The cleric said: ” I tweeted ‘End ASUU strike’ yesterday Sunday and today Monday (yesterday) I am trending on twitterUna well done. You guys should have done this at least a week later to avoid traces. END ASUU STRIKE!’”

May Edochie Reacts To Loved Up Video With Husband, Yul