Deji Adeyanju Promises To Give Lady Allegedly Involved In S3exual Relationship With Apostle Suleman $10,000 If She Provides Adequate Evidence 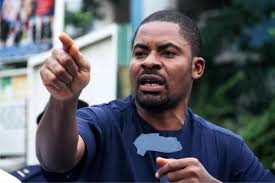 Comrade Adeyanju in series of posts on his official Twitter page, emphasized that the lady always ranting about @APOSTLESULEMAN doesn’t get tired.

” It’s now a yearly thing. “Even if you show pictures of the man of God robbing a bank, I won’t believe. In this age of photoshop. Show us video evidence then I will believe. The pictures posted all look fake, he stated.

“Apostle Johnson Suleman is lucky he wasn’t accused of rape. A friend almost got into this rape thingy if not for the receipts he kept. Fear these hungry and desperate folks ooo. I know the country is hard but you guys don’t have to go to any length to blackmail people for money.

Deji Adeyanju also called on married men to stop cheating on their wives, as that’s the only way a marriage would be peaceful.

” If you cheat and delete your chats so your wife doesn’t catch you, the day you stop paying your sidechic very well and she decides to accuse you of rape or anything like that,” it wouldn’t be funny.. he wrote.

Highlighting a post made by the lady previously identified as Stephanie Otobo, Deji promised to give her 10,000 USD if she posts a picture of her and the Apostle together either at lunch or somewhere else.

Nigerian Man Raises Alarm As Betting Company Refuses To Pay After He Won A...