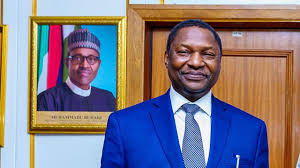 Shortly after Nigeria’s Attorney-General of the Federation (AGF) and Minister of Justice, Abubakar Malami came under fire from Nigerians for sharing over 50 exotic cars to ruling APC Members in Kebbi, a viral video currently circulating online showed the moment malami bragged about his latest feat, Oyogist reports.

However, his intention to distribute such costly vehicles triggered negative reactions among Nigerians, as many wondered where Malami got billions of naira to purchase the vehicles.

In a video shared by a popular news platform few minutes ago, the Attorney-General Abubakar Malami could be seen bragging about sharing 200 exotic cars worth over N2.7 billion last week.

However, it is noteworthy that Months before he was appointed in 2015, Mr Malami told a Kano radio he couldn’t afford N12 million to renovate his residence.