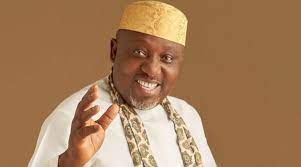 Oyogist has learned that a former governor of imo state, Rochas Okorocha has declared interest to run in the forthcoming presidential elections.

Okorocha made this known in a letter to the Senate President which was read by Ahmad Lawan at plenary.

“Ahead of the 2023 presidential election, Senator Rochas Okorocha has made public his interest to contest in the election.

“The lawmaker declared to run for presidency in 2023 on the platform of the All Progressives Congress (APC).

He said he will address nigerians in a press conference on Monday 31st January 2022 to officially declare his ambition to contest the presidency.