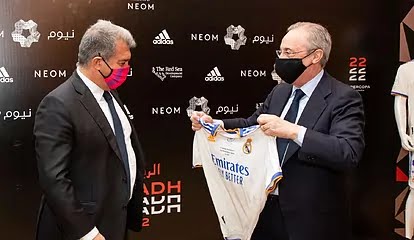 Oyogist has learned that Spanish gaints, Real Madrid and Barcelona have agreed not to interfere with players’ contract renewals.

According to sources, ‘Both teams are aware that any decisions they make can affect the other greatly, whether this be the Super League, the fight against the management of LaLiga or other simpler sporting decisions.

The two clubs have held talks with each other, over the months, as some of these discussions have been about a certain unwritten rule: respecting the contract situations of each other’s players.

There has been a verbal agreement Perez and Laporta to not interfere with players on the other side who are still under contract.

Players who are out of contract are another story, of course, and are fair game if one of the pair decides to pursue them.