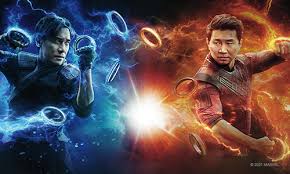 An incoming sequel to “Shang-Chi and the Legend of the Ten Rings” has been announced by Marvel studios.

He’s also in development on a Marvel series for Disney Plus.

The new deal will allow Cretton to develop TV projects for both Marvel Studios on Disney Plus and the Onyx Collective for Hulu and other platforms.

“Shang-Chi” which was released few months ago is currently the highest-grossing film at the domestic box office with $224.5 million.

At the worldwide box office, the film has made $431.9 million so far and stands as the eighth highest-grossing film.

“Destin is an amazing collaborator who brought a unique perspective and skill to ‘Shang-Chi and the Legend of the Ten Rings.’ We had a fantastic time working together on the film and he has so many intriguing ideas for stories to bring to life on Disney Plus, so we’re thrilled to expand our relationship with him and can’t wait to get started,” said Marvel Studios president Kevin Feige in a statement.

Actress Yvonne Jegede brags as Marrying a Campbell which she Co-produced bags 9 out...