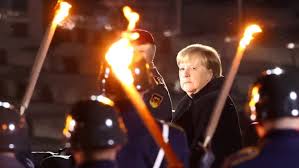 Oyogist has learned that an outgoing German chancellor, Angela Merkel recieved the highest military ceremony for a civilian on Thursday.

The ceremony which kicked off with several candle lights had an eclectic mix of music personally selected by the outgoing leader and punctuated by an emotional speech.

Merkel is due to officially step down next week after 16 years in office.

Her successor, a Social Democrat Olaf Scholz, is expected to be sworn in as chancellor after lawmakers give him the final green light.

Merkel in her outgoing speech said that her time in power had “challenged” her both politically and personally.”

“But at the same time, it was a deeply satisfying position,” she said.

“Our democracy lives from the capacity to engage critically with the ideas and to correct its path and it lives from balancing out the respect that we have for one another and for the interest we have for one another — based on solidarity, and trust — and also trusting in facts and trusting that wherever scientific understanding is denied and conspiracy theories are pursued and incitement to hatred is pursued.

”Merkel also said that the pandemic has demonstrated “just how important trust in politicians, in science and in public discourse and society is. But also just how fragile those things can be.”

She concluded her speech saying that it was now down to the next government ”to find answers that challenge us,”.