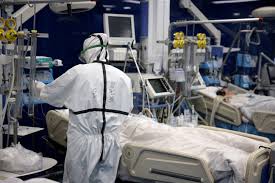 Oyogist.com has learned that the number of coronavirus infections recorded so far in Eastern Europe exceeded 20 million on Sunday due to the worst outbreaks since the outbreak of the pandemic and delayed vaccination efforts.

Countries in the region have the lowest immunization rates in Europe, with less than half of the population receiving single doses.

Increase in new infections in the region are steadily increasing, with an average of over 83,700 new cases per day, the highest level since November last year.

Although only 4% of the world’s population, Eastern Europe accounts for about 20% of all new cases reported worldwide.

According to analysis, three of the top five countries reporting the highest death toll in the world are in Eastern Europe in Russia, Ukraine and Romania.

As the wave of infectious diseases intensifies, many in Eastern Europe are torn between rebellion and regret for not being vaccinated.

Singer, Bella Shmurda offers scholarship to little boy who went viral for singing and dancing to his song (Video)