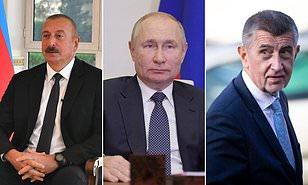 Findings from the International Consortium of Investigative Journalists has confirmed that the King of Jordan secretly bought £70million worth of property in the US and UK, Oyogist reports.

Also further investigations also reveal that former British prime minister Mr Blair and his wife Cherie saved about £321,000 (NGN178,600,548) in stamp duty when they bought an office in London.

Russian President Putin was linked to secret assets in Monaco. Although Many transactions show no legal wrongdoings, it primarily exposes how the UK has failed in its promise to bring in a register of offshore property owners.

As growing concerns into some of the purchases deepens, Sources Alleged that they could be the work of money laundering – while some of those named now face allegations of corruption and global tax avoidance.

Azerbaijani President, Ilham Aliyev and his family were linked to more than £400million worth of property in the UK .

They also appeared to have made a tidy £31million profit after selling a London property to the Queen’s Crown Estate, which is managed by the Treasury.

Fergus Shiel, from the International Consortium of Investigative Journalists, said:

‘There’s never been anything on this scale and it shows the reality of what offshore companies can offer to help people hide dodgy cash or avoid tax.’

He added: ‘They are using those offshore accounts, those offshore trusts, to buy hundreds of millions of dollars of property in other countries, and to enrich their own families, at the expense of their citizens.’