Copyright 2021 - All Right Reserved
Home Celebrities ‘I revel in these moments!’, Harry Styles ‘in tears of joy’ as he shares fan’s baby’s gender reveal on stage (Video)
Celebrities 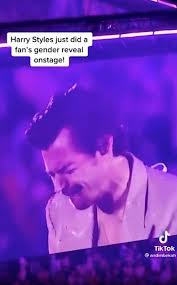 Harry Styles was overcome with emotion during a concert in Nashville, Tennessee, when a fan asked him to help her reveal the gender of her baby on stage, Oyogist.com reports.

The One Direction star, 27, who is currently on tour, spotted a mum-to-be in the crowd with a sign which read: ‘I’m having a baby. Please make it your business…,’ which is a reference to his Kiwi lyrics: ‘I’m having your baby, it’s none of your business.

’Her friend standing next to her held another sign which read: ‘…And open these gender results.

’Having taken the envelope and a phone, which we assume was calling the dad-to-be, Harry made the most of sharing this special moment with the couple.

He told the crowd: ‘I revel in these moments because I know everything and you don’t,’ before joking that he was going to do another song before revealing it. Harry then made the audience do a countdown while the pregnant fan looked on nervously, before revealing: ‘A little baby girl!’

The Watermelon Sugar star raised his arms in the air as he sank to his knees on stage to roars from the crowd, before appearing to break down in tears at the emotionally charged moment.

He then joked: That’s what I wanted, is that what you wanted?’While the fan-taken video cut off at the point Harry appeared to start sobbing, the concertgoer who managed to film the epic moment later confirmed that Hazza wasn’t actually crying but just pretending to.

Philippine President Duterte says he is retiring from politics