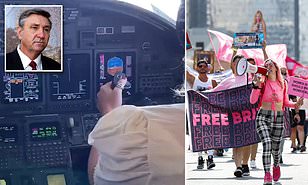 OYOGIST has learned that Britney Spears reportedly ‘burst into tears’ after she learned that her father Jamie has been suspended as the conservator of her personal life and $60 million estate after 13 years.

The pop star shared an Instagram post showing her flying a prop plane for the first time.

A second video captures the view as she flown over a strip of green land cutting through blue waters which was followed by an unsteady photo of palm trees.