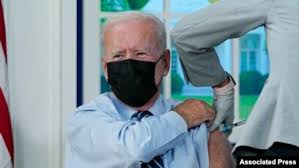 He received this today Sept. 27, 2021, during an event in the South Court Auditorium on the White House campus, in Washington.

This is coming few days after his administration approved a third shlot of Pfizer’s vaccine for certain populations.

Before receiving his shot on camera, Biden told reporters at the White House that “boosters are important, but the most important thing we need to do is get more people vaccinated” with their initial shots.

He said 77% of the U.S. adult population has received at least one dose of a coronavirus vaccine.

“A quarter of the country can’t go unvaccinated,” he said, after getting his booster shot.

The U.S. Centers for Disease Control and Prevention (CDC) approved the boosters last week for three categories of Americans: those age 65 and older; frontline workers such as teachers, health care workers and others whose jobs place them at risk of contracting COVID-19; and those ages 50 to 64 with underlying conditions.

The booster shot is available for those who received the Pfizer-BioNTech vaccine at least six months ago.

The White House said Friday 20 million Americans are eligible for the shot immediately, while 60 million Pfizer-shot recipients will be eligible for boosters once they reach the six-month mark.

Biden, 78, received his first dose of the Pfizer vaccine in December and a second shot in January, before he was sworn into office.

In comments from the White House Friday, Biden encouraged those eligible to get an additional vaccine dose.”Like your first and second shot, the booster shot is free and easily accessible,” he said.

Biden announced in August that he wanted to see all Americans receive booster shots as the country experienced a wave of new coronavirus cases from the highly transmissible delta variant.

His plan was put on hold earlier this month, however, when an advisory panel for the U.S Food and Drug Administration rejected the widespread use of the boosters, citing a lack of data on their safety and value.

The independent panel did endorse extra vaccine doses for those age 65 and older or at high risk of severe illness.

The CDC recommended that another category of Americans receive a booster shot: those whose jobs put them at a high risk of exposure to COVID-19.

That recommendation by agency officials last week overruled the CDC’s own panel of health experts, triggering further debate about who should receive a booster shot.

The World Health Organization has also weighed in on the matter, calling on the United States and other countries to pause the booster shot rollout to increase supplies for global vaccination distribution.

When asked about the WHO’s stance Monday, Biden said the United States is “doing more than every other nation combined” to get vaccines to countries around the world.Biden announced last week that the United States was purchasing another 500 million doses of the Pfizer vaccine to donate internationally, for a total of one billion doses over the coming year.

The FDA has not yet considered the use of boosters by drugmakers Moderna or Johnson & Johnson.

The European Union’s drug watchdog said last week it plans to decide in early October whether to approve a third dose of the Pfizer-BioNTech COVID-19 vaccine for those over age 16.

Watch video of Biden receiving the shot below;

R. Kelly faces up to 100 years in prison, found guilty of nine counts of racketeering and sex trafficking