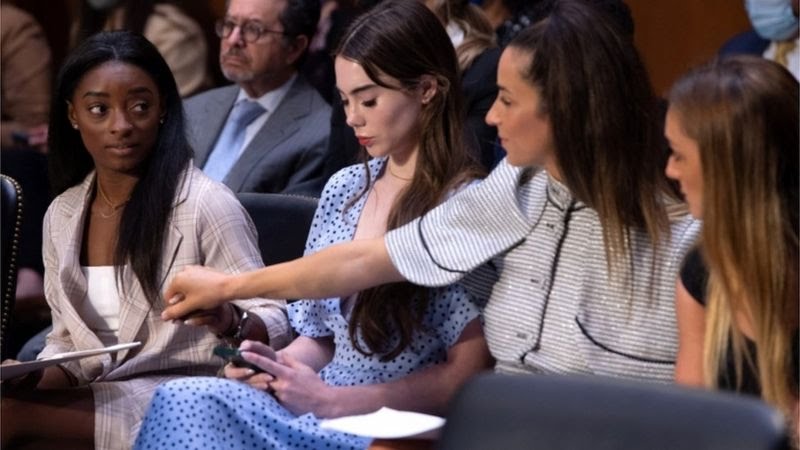 In vivid and emotional testimony at a Senate hearing Wednesday, four elite American gymnasts testified about the abuse they had suffered by former USA Gymnastics doctor Larry Nassar and their feelings of betrayal by investigators, including from the FBI which they say let them down, Oyogist.com reports.

The four athletes were among more than 200 women who gave powerful impact statements to a court in 2018, detailing Larry Nassar’s abuse as the sports doctor of the United States women’s national gymnastics team.

In total, Nassar was accused of sexual abuse by more than 330 women and girls at USA Gymnastics and Michigan State University.

The committee is examining shortcomings in the FBI’s investigation into Nassar, later convicted of sexually abusing girls.

He is serving a life sentence in jail.Olympic gymnast Simone Biles tearfully said she blames Nassar and also “an entire system that allowed his abuse,” including USA Gymnastics and the U.S. Olympic and Paralympic Committee.

“The scars of this horrific abuse continue,” Biles testified, saying that “the impact of this man’s abuse will never be over.”

Aly Raisman, who served as captain of the 2012 and 2016 US Olympic gymnastics teams, expressed disgust that she was “still fighting for the most basic answers and accountability” more than six years after first reporting her abuse.

“Over the past few years it has become painfully clear how a survivor’s healing is affected by the handling of their abuse,” she testified.She criticised the FBI investigation as being “like guesswork”, warning that not addressing its serious flaws would result in a recurring “nightmare” for many more women.

McKayla Maroney, who won gold at the London 2012 Olympic Games, described the experience of being interviewed by the FBI as replete with “silence and disregard for my trauma”.

“They chose to fabricate, to lie about what I said and protect a serial child molester,” she told senators.

“What is the point of reporting abuse if our own FBI agents are going to take it upon themselves to bury that report in a drawer?”

A long-awaited report into the FBI’s investigation, which was published in July, found numerous missteps, delays and cover-ups by FBI agents, which allowed Nassar’s abuse to continue for several more months after the case was first opened.

The 119-page report by the Department of Justice Inspector General found that, despite the seriousness of the allegations against Nassar, the FBI field office in Indianapolis had been slow to respond.

The agency initially interviewed only Ms Maroney while declining to interview other young women who had come forward with their stories.Confronted by their mistakes, two FBI officials lied during interviews to cover up their errors, the report said. According to the FBI, one of those officials was fired last week.

FBI Director Christopher Wray apologised profusely to those present for the “reprehensible conduct” and “fundamental errors” detailed in the July report.

Mr Wray only took the agency’s top job in 2017, but pledged to prevent a repeat of the mishandled case under his leadership.

He pointed to last week’s removal of the supervising official involved, while noting the other official – who led the field office in Indianapolis – had retired long before he could be disciplined.

He acknowledged the work of both agents had “violated the FBI’s long-standing code of conduct” but was “inconsistent” with the vast majority of his team.

At a news conference later on Wednesday, White House spokeswoman Jen Psaki said the president “supports” the recommended steps outlined for the FBI in the Department of Justice report.

But both lawmakers and witnesses called out the department for being a “no-show” at the hearing despite being invited. Speaking after the hearing, Democratic Senator Richard Blumenthal noted the department must still answer more questions.

BBNaija: “I need to learn to do better next time”- Nini expresses remorse after heated argument with Cross