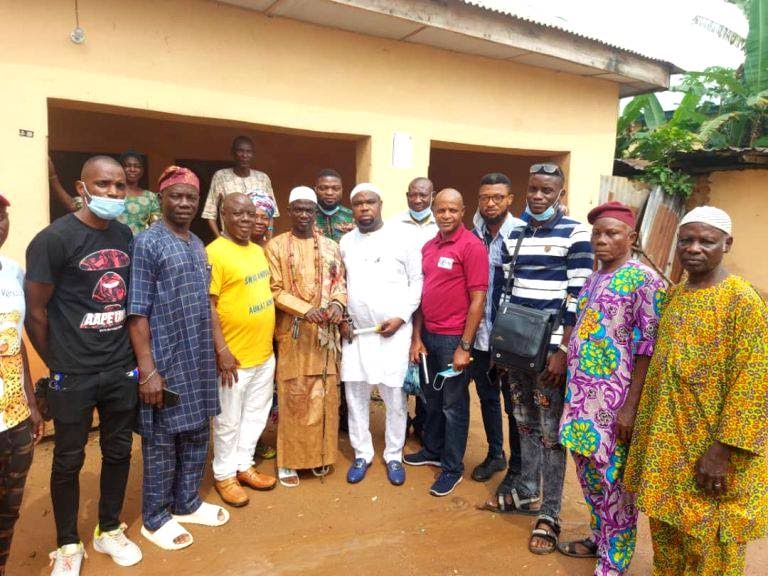 Oyogist.com has learned that A traditional ruler in Epe Division of Lagos State, Chief Ganiu Lanotu, has claimed that he has just completed a two-day traditional rituals for peace and progress of his community and the nation at large.

Lanotu, who is the Ogegbo of Ibonwon land, disclosed this while receiving some postgraduate research students of University of Ibadan (UI) at his Ibonwon palace, Eredo, Epe, on Tuesday.

“I will use the power in my tongue to pray for you students, the lecturers, indigenes present at the palace today and for Nigerians at large.

“That, henceforth, whatever you all lay your hands on shall prosper. Ibonwon community, Lagos State and Nigeria shall know peace.“The nation will progress, so also Ibonwon community and its people shall advance in their daily endeavours.

“I pray by the power of “Eledumare”, Oduduwa, that the insecurity challenges in this country shall be put to rest, may God guide and guard our leaders alright,” the traditional ruler prayed.

Lanotu said that the two days rituals became necessary at this critical time so that the country could know peace and citizens could sleep with their two eyes closed.

“But with this little time I have spent on the throne, the community has known my impact and they will continue to know my impact for good.

“During my reign, the indigenes shall progress in their businesses, places of work and in all good things they are doing,” he said.Lanotu appealed to Gov. Babajide Sanwo-Olu to upgrade his palace and title to that of a first class traditional ruler.

“In this town Ibonwon, we don’t have Oba, we refer to our Oba as Ogegbo; therefore, the Lagos State governor should recognise the title and upgrade it to Oba status.

“All rights accorded to traditional rulers in Lagos State should be extended to my palace as well.

“Ibonwon is the only Alegemo (Ogegbo) town in Lagos State, others are in Ogun state,” he said.

The traditional ruler expressed appreciation to the visiting students for recognizing his palace as a custodian of history, culture and traditions