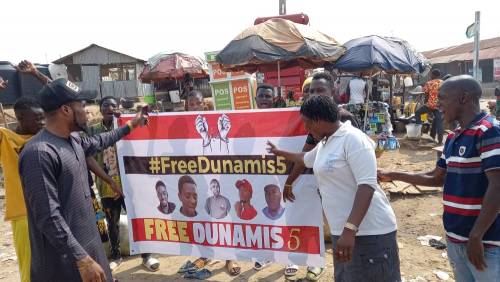 Oyogist has learned that various Human right activists had stormed the Dunamis International Gospel Centre ( The Glory Dome) in Abuja Earlier today to demand release of five #BuhariMustGo Protesters who were Arrested by the Department of State Service.

The activists were arrested on Sunday, July 4, 2021, at the church for wearing T.Shirts with inscriptions that reads, “#BuhariMustGo.”

The Leader of the group, Agena Robert Ande described the arrest of the five youths as unconstitutional and illegal.

He said, “I am a Dunamite, a certified one, but I say no to injustice. These are congregants who were arrested and detained by the DSS illegally. We are saying they should be released. Our father in the lord should order the release of these five youths.

They went to Glory Dome to worship just like every other congregant but they were beaten up and arrested and till today we don’t know their location. We don’t have any information about them, they even denied their lawyers access to them.

” So we are here to tell Dr.Paul Enenche to release these people. We are all Nigerians and there should be justice in the church. Every religious leader preaches justice and peace and that is why we are here.