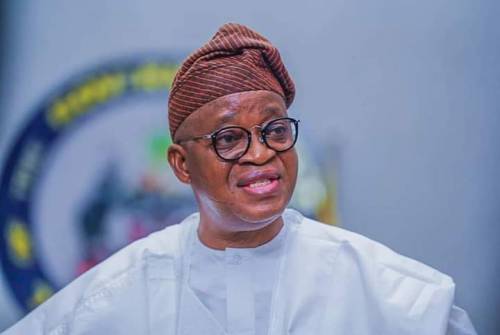 Oyogist has learned that the governor of Osun State, Oyetola have instructed civil servants to wear Adire (a distinctive local fabric) uniform to work every Thursday to promote Nigerian fashion and culture.

The governor made this known while giving his remarks at the state’s International Fashion Week in Osogbo.

Oyetola said the state government had partnered with Musty Great Development and Alexandria Jones Couture, United States of America, to organize the International Fashion Week to promote the Osun brand of Adire for global exhibition.

According to the Governor;

“Adire is indigenous to Osun and it is not for nothing that Osogbo, the capital, is referred to as ‘Ilu Aro’ (Home of dye).

Oyetola also urged the residents to take advantage of the opportunities offered by the initiative.He said his administration was committed to promoting and projecting culture to the world in a way that would draw attention and attract humongous revenue to the state.

“In furtherance of efforts of this government to preserve and promote the production of Adire Osun as well as bolster the image of Osun as a culturally correct and indigenous product inclined state, every Thursday has been declared Adire Osun Day.”Consequently, effective from August 27, 2021, all public and civil servants in the state shall wear Adire to work,” he said.
Governor OyetolaOsun State
Share
0
FacebookTwitterPinterestLinkedinRedditWhatsappTelegramViberEmail

American rapper, Cardi B gets dragged for gifting her daughter expensive jewelry