Hiati President, Jovenel Moise has been reportedly assassinated at his home yesterday night 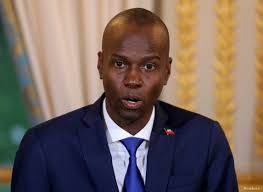 Oyogist.com has learned that the president of Haiti, Jovenel Moïse, has been assassinated at his home leaving his wife injured during a raid on the presidential quarters in the dead of night.

“A group of individuals who have not been identified, some of whom were speaking Spanish, attacked the private residence of the President of the Republic and fatally injured the Head of State,” the PM wrote.

Joseph said the first lady was also shot but has survived the attack. He condemned the “odious, inhuman, and barbaric act” and appealed for calm, adding: “All measures have been taken to ensure the continuity of the State and to protect the Nation. Democracy and the Republic will win out”.