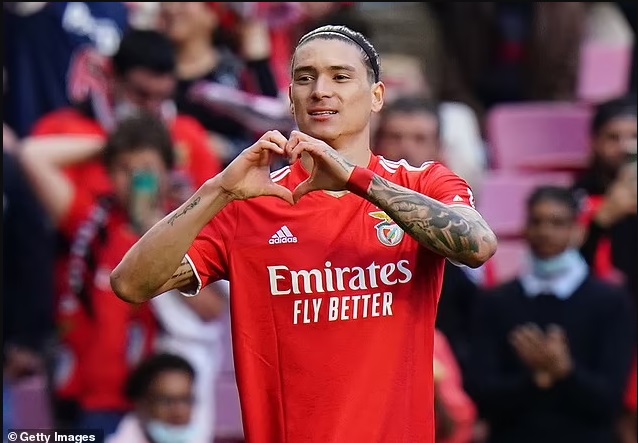 Oyogist has learned that Liverpool has signed Darwin Nunez.

The confirmation was given by Benfica after the club announced it has reached an agreement with Liverpool over the transfer of Darwin Nunez for €75million (£64m) plus add-ons that could see the fee rise to €100m (£85m).

Liverpool are expected to announce the transfer record for the signing of the 22-year-old, who will overtake Virgil van Dijk as the most expensive player in the club’s history.

The Primeira Liga side released a statement announcing they had agreed the transfer of the striker with the Reds.

Benfica added in the statement that the deal now rests on the player confirming personal terms with Liverpool, though it has already been confirmed that Nunez will sign a six-year contract, worth more than £6m per year.

‘SAD informs the Securities Market Commission (CMVM), under the terms and for the purpose in article 248-A, that it has reached an agreement with Liverpool FC for the transfer of all rights to the player Darwin Nunez for the amount of €75million.” the statement read.

‘The agreement includes add-ons, so the total amount of the sale could reach €100m. ‘It also informs that said agreement is dependent on the conclusion of contract of the player with Liverpool FC.’

The fee was agreed in the early hours of Monday morning and Liverpool are yet to confirm the deal. The 22-year-old is currently in Madrid and is expected to begin his medical today.