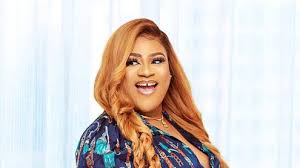 Actress Nkechi Blessing Sunday has claimed that a man she described as “Mr Anonymous” placed her on a N1m monthly allowance, oyogist reports.

The actress stated this while agreeing on a post that praised men who spends money on their women even if the ladies are independent.

She further revealed that the identity of the man who is giving her the allowance is still not known by others.