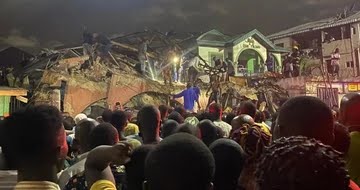 Oyogist has learned that a three-storey building had collapsed at 32, Ibadan Street, Ebute Metta, Lagos on Sunday night.

The Lagos State Fire and Rescue Service made the announcement late Sunday, adding that rescue operations have begun.

The announcement read, “An alert of a collapse of a three storey building by 32 Ibadan Street, Ebute Meta was received at 21:48 hours, Sunday with Lagos State Fire and Rescue Service already at the scene.

“Search and Rescue ongoing with updates to follow, please.”

As at the time of filling this report, two people have reportedly been brought out alive from under the rubble at press time; a young boy and an aged man who sustained injury on his head.