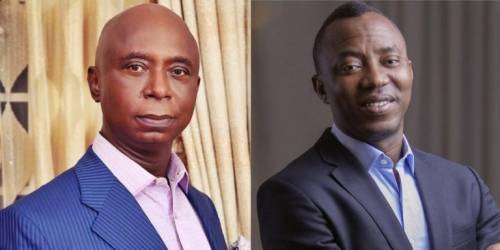 Sowore was illegally arrested by the police on the Court of Appeal premises on the alleged orders of Nwoko over some trumped-up allegations.

The suit is between Omoyele Sowore and the Nigeria Police Force as the first respondent, the Inspector-General of Police as the second respondent, the Commissioner of Police, Abuja and Ned Munir Nwoko as the third and fourth respondents respectively.

The suit is praying the court for the following reliefs, “b) A DECLARATION that the detention of the Applicant on the 24th day of February, 2022, from the hour of 4pm in the afternoon to around 9pm in the night, by Officers of the 1st Respondent, acting under the instructions and authorization of the 2nd and 3rd Respondents respectively, over publications allegedly made by Sahara Reporters, a legal entity, separate and distinct from the Applicant, amounts to a breach of the Applicant’s right to personal liberty and freedom of movement as guaranteed under Sections 35(1) and 41(1) of the Constitution of the Federal Republic of Nigeria, 1999 (As Amended) and Articles 6 and 12 of the African Charter on Human and Peoples’ Rights (Ratification and Enforcement)Act, Cap A9, LFN 2004and as such illegal and unconstitutional;“c) AN ORDER of this Honourable Court, mandating the 1st, 2nd, 3rd and 4th Respondents to issue an apology to the Applicant, to be published in two reputable national daily Newspapers for the violation of the Applicant’s fundamental rights as afore-stated;“d) AN ORDER of this Honourable Court directing the 1st, 2nd, 3rd and 4th Respondents jointly and severally, to pay to the Applicant, the sum of ₦200, 000,000.00 (Two Hundred Million Naira), only, as general and exemplary damages for the violation of the Applicant’s fundamental rights as afore-stated; e. AN ORDER OF PERPETUAL INJUNCTION restraining the Respondents by themselves or their officers or their privies or their agents or anyone acting for them or on their instruction or authorization, in relation to this matter, from further interfering with or violating the Applicant’s fundamental rights as afore-stated;

“A declaration that the arrest of the applicant on the 24th day of February within the precincts of the Court of Appeal, Abuja, by officers of the first respondent over publications allegedly made by SaharaReporters, a legal entity, separate and district from the applicant, amounts to breach of the applciant’s right to personal liberty and freedom…”

On Monday, Sowore’s lawyer, Tope Temokun, said, “Wẹ have commenced the process of slamming N200million damages fundamental rights enforcement suit in the federal high court Abuja on behalf of Omoyele Sowore against the acclaimed billionaire politician, Hon. Ned Nwoko and the police authorities for the illegal arrest of Omoyele Sowore at the Court of Appeal premises on the 24th of February 2022 and for the improper use of powers by the Nigeria police, to lay siege on the entire Court of Appeal for Omoyele Sowore on the prompting of one billionaire.

“Hopefully tomorrow, the court process shall be served on the respondents i.e the Nigeria Police Force, the IG of Police, the Commissioner of Police for FCT and Hon. Ned Nwoko who are respondents.

“We need to come together to interrogate the power of money in our policing system. Just few weeks ago the Hon. Ned Nwoko used the police to arrest Hauwa Saidu Mohammed, àlsò known as Jaruma, for mere social media banters and had her detained for 3 days on the same allegation of defamation, like he is alleging against Sowore now. For how long will this continue?”