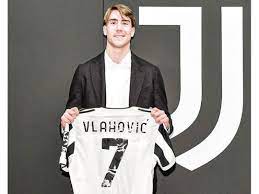 Newly-signed Juventus striker, Dusan Vlahovic, has expressed his pride at completing his dream move from Fiorentina in a deal worth up to €80m.

Vlahovic, who turned 22 earlier on Friday, enjoyed a dream birthday after putting the finishing touches to the move.

The Serbian will earn €7m annually over the course of a five-and-a-half year contract.

Vlahovic has scored 20 goals in just 24 appearances already this season and was also courted by Arsenal and Manchester City.

But he decided to stay in Serie A and has now signed for Juve, where he will wear Cristiano Ronaldo’s old No.7 shirt.

“Juventus represents pride, tradition, family. Juventus are always there until the last minute, they never give up.

“The team always comes first, I am at the disposal of the coach and my teammates, who I will try to help in the best way possible,” Vlahovic said.