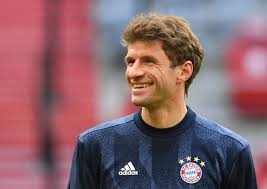 According to reports reaching oyogist.com, Premier league clubs, Newcastle and Everton have indicated interest in signing Bayern Munich legend, Thomas Muller’ with the German international approaching the final year of his contract at the club.

Although it’s yet to be confirmed if Muller would be ready to swap another Bundesliga title for a relegation fight in the Premier League.

Muller has spent his entire career at Bayern Munich, first breaking into the senior team in the 2008-09 season.

He is third on their all-time appearances list at 610, and only behind Gerd Muller and Robert Lewandowski in terms of goalscoring on 223 at present.