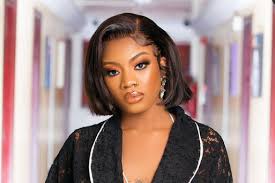 Bbnaija Shine ya eyes housemate, Angel Smith,on Wednesday has opined that men should have no opinion over what women do to their bodies, Oyogist.com reports.

The reality TV star made this known on her Twitter page on Wednesday night.The 21-year-old writer stated that Men should have no opinion concerning what women choose to do with their bodies.

According to her, no matter what choice a woman makes with her body ranging from use of IUDs, abortion, plastic surgery, or even change of clothes that Men has no right to interfere in their choice.

“As a man,you shouldn’t have an opinion on what women do with their bodies.

“Not IUDs, abortion, plastic surgery, choice of clothes etc; nothing

“Hopefully, women are given more autonomy over their bodies and more women find the courage to fight for their autonomy; especially African women.”