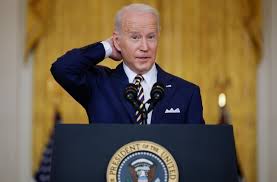 Oyogist has learned that US President, Joe Biden is expected to nominate a black woman to the Supreme Court.

Biden has long vowed to make such a historic appointment.

She is also a former public defender and previously clerked for Breyer.

The D.C. Circuit has been a launchpad for a number of Supreme Court justices.

John Roberts, Clarence Thomas and Brett Kavanaugh all previously served on the D.C. Circuit, as did the late Justices Ruth Bader Ginsburg and Antonin Scalia.