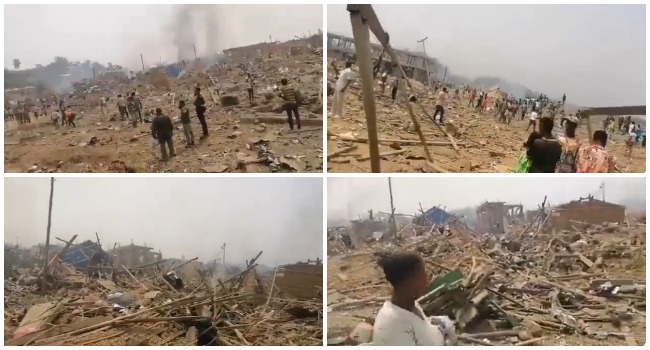 Oyogist.com has learned that a truck carrying explosives collided with a motorcyle in western Ghana on Thursday, causing an immense conflagration and the “loss of lives”, President Ghana Nana Akufo-Addo.

The accident happened around noon in Apiate, near the city of Bogoso some 300 kilometres (180 miles) west of the West African country’s capital Accra.

Saying the blast caused “the loss of lives and the destruction of properties”, the president added in a Tweet: “It is a truly sad, unfortunate and tragic incident.”

Local police released a statement saying that “preliminary investigation has established that a mining explosive vehicle… collided with a motorcycle resulting in the explosion.”

“Most of the victims have been rescued” and taken to various area hospitals, the statement said.

“Reinforcement of resources and personnel have been dispatched to the area,” it added, calling on the public “to remain calm”.

Danger Averted as Over 20 Corps Members Exit A Burning Bus Through the Window...