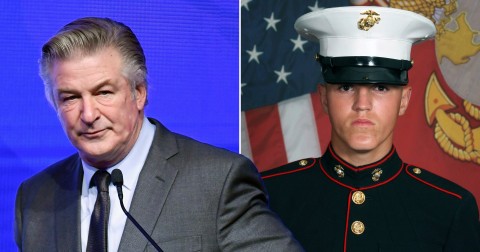 Oyogist has learned that Popular American actor, Alex Baldwin has been sued for $25million (£18.3million) by the family of a US Marine who was killed in Afghanistan, after the actor allegedly wrongly labelled the soldier’s sister as a participant of the Capitol riot.

Earlier this month, the actor had turned in his phone to authorities after a search warrant amid the ongoing investigation into the Rust shooting, when cinematographer Halyna Hutchins was shot dead on set.

Baldwin was holding the prop gun at the time when it went off with a live round.

However, the 63-year-old has now supposedly become engaged in a lawsuit that is seeking millions from the 30 Rock star and alleging ‘defamation, invasion of privacy, negligence and intentional infliction of emotional distress’,