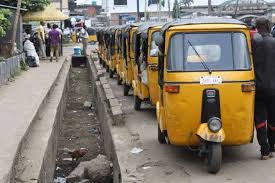 Oyogist.com has learned that Tricycle operators in Kano have suspended the strike that was launched to protest the operational permit enforced by the Kano State Road and Traffic Agency (KAROTA).

The suspension of the strike was announced after a meeting held on Wednesday, between the Managing Director, KAROTA, Baffa Babba-Dan’agundi, who represented the state government and leadership of the tricycle operators in the state.

The meeting was held at the state headquarters of the Nigerian Bar Association (NBA) in Kano and moderated by Mahmoud Gadanya, a lawyer.

The lawyer of the tricyclists’, Mr. Abba Hikima, announced the suspension of the strike while addressing newsmen shortly after the meeting.

Hikima said that among the resolutions reached at the meeting were members of the association would resume operations from Thursday.

He said that the association would write to the state government to request a downward reduction of the operation permit from N8,000.

Hikima revealed that no tricycle operator would be forced to continue to pay the amount until the government stated its position on the fee, which would be announced at a meeting to be reconvened on or before Jan. 18.

He added that members of the association would also continue to pay the daily levy of N100, among other resolutions.