Copyright 2021 - All Right Reserved
Home Lagos Nigerians React as Mummy G.O Reveals her story while she was staying at Ojuelegba (VIDEO)
Lagos

Nigerians React as Mummy G.O Reveals her story while she was staying at Ojuelegba (VIDEO) 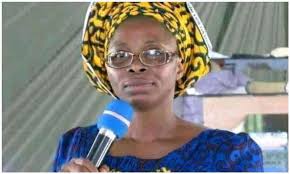 Several Nigerians took to popular microblogging platform, twitter to express their reactions after the general Overseer of Rapture Proclaimer Evangelical Church of God, Funmilayo Adebayo, popularly known as Mummy GO disclosed her story while she was still staying at Ojuelegba, oyogist reports.

According to her, she was the “mother of harlots and armed robbers in lakuta hotel, Ojuelegba.Ojuelegba is a small town located in the outskirts of Lagos.

She Futher stated that she sells cocaine to people both locally and international, as she doesn’t enter plane, but flies using a carpet”.

A part that caught most Nigerians attention was when she stated that Fmr President Obasanjo cannot do without her in a day.