Tiger King Star, Masha Diduk arrested for stealing candelabra worth $5,000 from a casino in Las Vegas 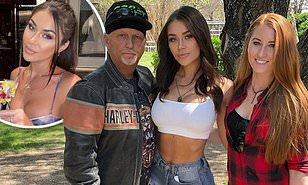 Oyogist has learned that Tiger King star Masha Diduk has been arrested in Las Vegas for stealing a piece of item worth $5,000.

According to sources, Diduk reportedly took a pricy candle holder from a private dining room at a club located in the Wynn hotel.

The 29-year-old social media personality, best known as Jeff Lowe’s ‘hot nanny’ on the Netflix show, was later captured on security cameras holding the candelabra on her forearm while making her way from the property.

The hotel’s security was later able to locate her and find the license plate of the car which she had been driving as well as a ticket that she used for valet service.

Further confirmation of her identity was provided through her social media posts.

Osinbajo to represent Buhari at ECOWAS summit in Ghana