Copyright 2021 - All Right Reserved
Home International ANALYSIS: The World’s Top 10 Richest People Added More Than $400 Billion To Their Net Worth In 2021
International 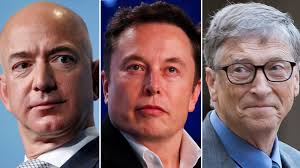 Oyogist has learned that the top 10 richest people in the world added an estimated $402 billion to their networth in 2021and Tesla CEO Elon Musk was the biggest wealth gainer.

According to a recent survey by Bloomberg Billionaires Index, Tesla CEO, Elon Musk, started 2021 with a net worth of $156 billion but ended the year with an estimated $277 billion.

The Space X founder in December said he’s planning to pay more than $11 billion in taxes.

What Is The Bloomberg Billionaires Index?

The Billionaire index by Bloomberg is a daily ranking of the world’s richest people and the figures are updated at the close of every trading day in New York.

Much of Elon Musk’s income has been spent on SpaceX, the private space rocket company he founded in 2002.

Bezos had announced his resignation from his CEO role at Amazon in July.

Also on the list is Facebook founder Mark Zuckerberg who added nearly $25 billion to his fortune in 2020.

Zuckerberg had added an extra 110 acres to his controversial 1,500-acre estate in Kauai, Hawaii.