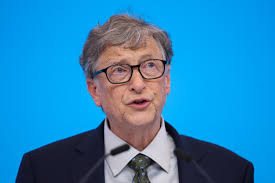 Microsoft Founder, Bill Gates has spoken regarding how his life has been after divorce.

Recall oyogist.com had earlier reported that the Billionaire and his ex-wife Melinda divorced earlier this year, after being together for 27 years.

Months after the divorce, Bill Gates has penned an open letter on his website to talk about how the last 12 months have gone.

He said: “Even though I think the things I’ve been working on are by far the most interesting part of my year, I know a lot of people are curious about a subject closer to home: my divorce. “Melinda and I continue to run our foundation together and have found a good new working rhythm, but I can’t deny that it’s been a year of great personal sadness for me.

Adapting to change is never easy, no matter what it is. “I’ve been impressed by how resilient my loved ones – especially my kids – have been in this challenging time.” he stated.

He also spoke about how difficult it has been seeing his children grow up, and leave the family home. He said: “My personal world has never felt smaller than it did over the last twelve months. “My family also experienced a lot of changes beyond what you probably saw in the news – my oldest daughter, Jenn, got married this fall, and her wedding was the highlight of my year

“Our youngest, Phoebe, graduated from high school and went off to college. “Since my son Rory is also away at school, that means I’m officially an empty nester