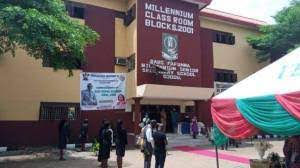 Commissioner for Education, Folashade Adefisayo, announced the closure when she visited the school on Wednesday.

A trailer had on Tuesday crushed some pupils of the school. Some of the students died on the spot, while some others were injured.

The incident sparked outrage among the students and inhabitants of the area.

Early this morning, students of the school protested the death of their colleagues.
Bab Fafunwa Millennium School
Share
0
FacebookTwitterPinterestLinkedinRedditWhatsappTelegramViberEmail

Don Jazzy reacts to rumors that he is gay